This past weekend, I bought a motorcycle. I actually had no intention of buying one this soon - I was going to wait about two more months - but this opportunity that presented itself was far too good to pass up. It’s a 1984 Virago. Yes, this bike is over 25 years old. That there could be a bike like this in such good condition is fantastic, but what makes it even better is that I had the same model of bike way back in 1993. So this bike is really special to me. I took it out for a couple of hundred miles this weekend - went down the PCH to the Three-Zero Cafe, then down to Alice’s. 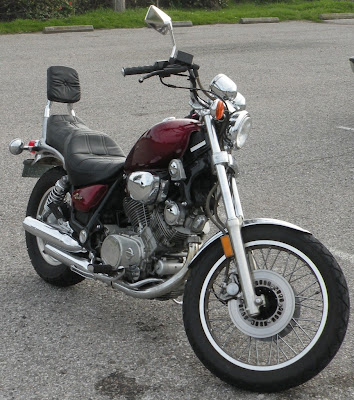 So I got to thinking - this makes this motorcycle #7 for me. I’ve of course been reminiscing about all the bikes I’ve had up to now. My first was back in 1992, a 1974 Honda CB360 I bought from some guy in Ballston Spa, NY. 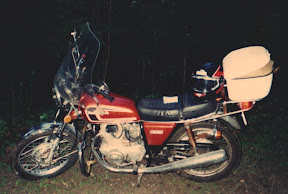 Then, in San Diego, I got this 1986 Virago XV700C (I think there was a C anyway). This was a very special version of this model, in a rare blue color with no “Virago” emblems on it. This was the first bike I went on a long trip on (San Diego to Toledo). Best bike I ever had. 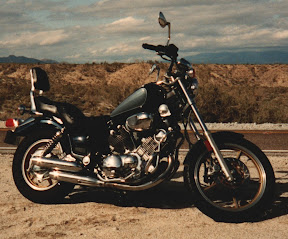 I sold the Virago (not a good move, in retrospect) before I moved to Iceland. Then, when I got back from Iceland I found this 1979(?) Honda CB750K. The engine needed to be rebuilt, but this guy took me from Toledo to DC and back, then all the way up into Manitoba and back down through Vancouver to San Francisco. Here it is in front of a Viking statue in Gimli, Manitoba 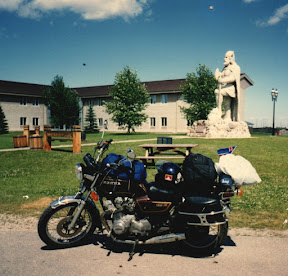 The CB750K didn’t last too long once I got to San Francisco. I had to have a bike. Anything. So a friend of Sam’s, a major(?) in the Marine Corps sold me this 1982 Kawasaki 750. Man, this thing lived a long, eventful life. Almost 2000 miles in one of the first weekends I had it, then I painted it gray. One of the mufflers came off in a trip to Las Vegas, coming very close to hitting a couple of my friends. Then it went down to LA once or twice, and since I’ve owned it, it stayed in good hands, with many other adventures to follow.

Then I got the FZ-1. Incredibly fast. I got it up to 162 mph. I went on some great trips with this one, too. I have no need to ever go that fast again, though. 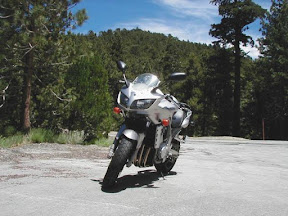 The FZ-1 met an untimely end. But I still needed to ride. So I got the V-Star. It was really, really loud. I enjoyed it at the time, but looking back, that might have been kind of meiwaku. Took some great trips, including up to Crater Lake and Portland.