Last night I went to a dance festival up in Gifu in a place called 郡上八幡 (Gujou hachiman). It’s a dance festival that lasts a couple of days. The celebrations start around sunset and last until 8am.

It was a fantastic day, up in the mountains so it wasn’t quite so humid. There were about 20 of us or so from Nagoya who met up there. Some of us got there early in the afternoon so we got to take a dip in the cool, swift current of the river (don’t know what it’s called - it’s a tributary of Nagaragawa).

It’s really an amazing event, something that’s been going on for hundreds of years, and everyone participates. Hopefully these pictures and videos can give a glimpse. On the fringes of the area where people are dancing, though, it really reminds me of a summer carnival in the states. Delicious greasy, salty food, silly games that no one can win (Unagi-tsuri), teenagers sneaking around trying to avoid getting caught, doing whatever.

As you can see, I wore a yukata again. I’m getting good at that now. 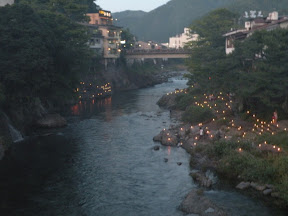 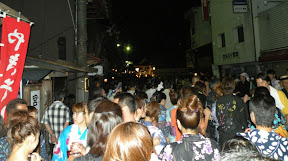 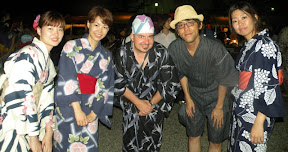 If you come to Japan, you should try to make it to a bon-odori like this.