I’ve finally finished reading my first complete book in Japanese. (Well, technically, I finished “Kitchen” by Banana Yoshimoto, but that one took me like a year, and I didn’t really enjoy it, so by the end it was just an ordeal.) But this book I really liked, and finished the 221 pages in just a couple months. And it’s the type of book I would recommend for someone learning Japanese if you’re like me: not into manga, prefer non-fiction, and usually read in short spurts. It’s called ”Tetsudo no nazo to fushigi ni kotaeru hon”, meaning, “The book that answers all the mysteries and wonders of railroads”, and it does just what it says on the tin. It’s awesome, because each question and answer is just two or three pages long - just short enough to read on the eight-minute subway ride to work. And it’s all about trains, which I’ve recently really gotten into. People have started to call me tetchan, which I’ll get into more later. 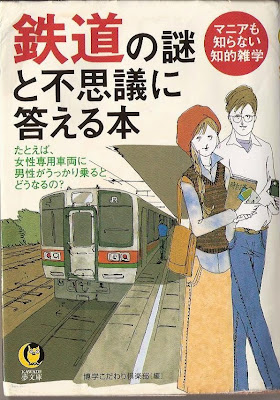 My next one is Haruki Murakami’s first book, “Kaze no Uta wo Kike”, which is translated as “Hear the Wind Sing”. The goal is to get through this one in three weeks.